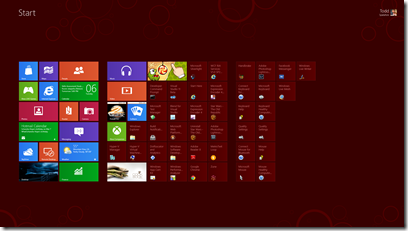 I am writing this from Windows 8. I have been running the developer preview since last September, but just last week I upgraded all of my machines to the Consumer Preview. So far it is an interesting transition from Windows 7. Windows 8 was built around the idea of touch first, and using the OS really reminds you of this fact. Many commenters on the Internet have looked down on this fact and dismissed the entire experience as either too childlike or too much of a change. One even went so far as to claim he will switch to Ubuntu Linux because Windows 8 isn’t enough like Windows 7.

Now you may notice that I’m not giving any link love to these people and this is intentional. Think about this: Windows 8 is so drastically different from Windows 7 that someone is going to switch to Ubuntu Linux? Ubuntu Linux is the same OS that was widely criticized last year when it switched the default desktop interface from a pure Gnome desktop to the Unity desktop. But I digress.

Windows 8 is designed for touch based systems. However, not every touch based system is the same. Comparing the experience of using Windows 8 on the Samsung //build/ slate that was given to attendees at the //build/ conference last September and using Windows 8 on an HP TouchSmart All-in-one computer shows exactly what is meant by this. You see many of the OS interactions occur by swiping a finger onto the screen from off the screen. That first pixel around the entire edge of the screen is dedicated to OS functions. However, on the TouchSmart monitor, and many touch screens that I’ve seen, there is a bezel around the screen that extends out from the actual screen. This makes it really hard to get your finger into that little crevice to initiate the swipe. However on the Samsung slate there is no bezel and the swipe is easy and natural.

Many people hate the idea of touching their monitor though and find the experience will get annoying. I can see that point of view, but I am not one of those people. After an all day coding exercise with the //build/ slate I went back to my ThinkPad laptop and found myself trying to touch the monitor far more often than I should. This doesn’t seem to happen when I am working on my desktop computer though. It must be the relative distance you are from the screen. When you are on a tablet/slate touch is natural. When you are on a laptop touch is starting to be less necessary, but still feels natural. A desktop computer with a monitor touch would be nice for some features, but not required. Finally, think about a 10 foot experience. The first thought that comes to my mind there is Kinect. I think this is also the answer to those that don’t want to touch their desktop monitor. Flicking a hand across the air to switch between applications seems like a very natural response.

Using Windows 8 with a mouse and keyboard isn’t as difficult as many people would have you believe. Since you don’t have a touch screen forget about swiping in from the bottom/top for application level menus just use a right click on the mouse. Also, forget about swiping in from the right to bring up the charms, just move your mouse to the top right corner of the screen in desktop mode and top right or bottom right in metro mode. If you want to switch applications move your mouse to the top left and you will see some white rectangular outlines appear along the left edge of the screen. Move your mouse down to open up a bar that shows what metro apps are running. This will include the desktop. You can also get this list by moving your mouse to the bottom left corner of the screen. Left clicking at the bottom left corner will also bring up the Start screen. Right clicking in the bottom left corner will bring up a power user menu of common admin apps that may be needed on the fly.

It isn’t hard to use the new Windows interface with a mouse and keyboard. You just have to understand that it works with the mouse by moving the pointer to the corners of the screen.

There are a host of keyboard shortcuts too, but we’ll leave those for another time. Except to say that the Windows Key on your keyboard is used for a lot more than just opening up the start screen.

I miss being able to move the pointer to the left side of the screen and dragging out the last application like I could with the developer preview, but I think that this new way will work better in the long run.

I hope that everyone out there will go into this new operating system with an open mind, but we all know that won’t happen. I dread the day when I go to an employer provided Windows 8 machine and it boots to the desktop and has the old Windows 2000 Start Menu on it. I’ve seen that with Windows 7 and it didn’t feel natural, and it would feel even worse with Windows 8.